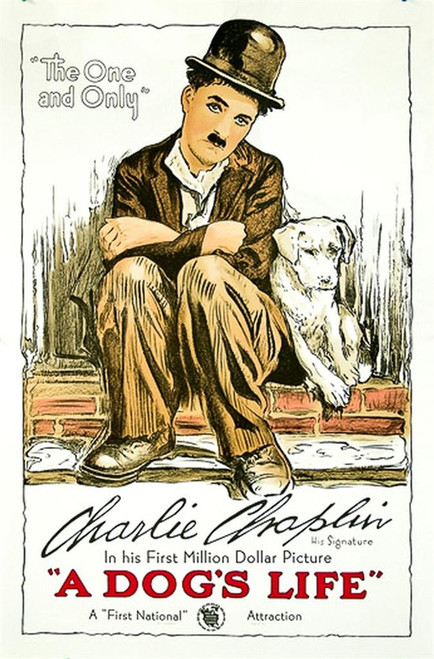 Charlie Chaplin A Dog's Life is a hand pulled fine art poster lithograph by S2 Art from their Art of the Movies collection. This lithograph is an exact recreation of the 1918 theatrical release one-sheet that was created to promote the silent film. of the  It is pulled through a rare, 19th century, French Marinoni Voirin printing press on hand-made Rives BFK French cotton paper.

This is not print or reproduction. It is a remastered, recreated, original work of art.

This one-sheet was produced at S2 Editions Atelier, New York City, in 1998 under the guidance of the Ré Society Ltd, and S2 Art company. It was created in partnership with the American Film Institute's, 100 American Classic Movie Posters.

This lithograph bears the trademark of the Ré Society, plus the blind stamped emblem of the S2 Editions Atelier. The signature of the chromist, David Copson, is also printed unobtrusively on this lithograph in order to distinguish it from the original Golden Age poster.

The lithograph is sequentially numbered in pencil in the lower left centre, by a curator at S2 Editions.

Comes with a certificate of authenticity by S2 Art Group, Ltd. Item is packaged and shipped in a museum quality tube.

A Day at the Races 1937 Movie Poster Lithograph