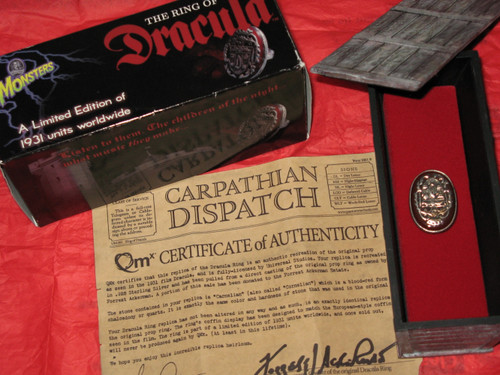 Initially slated for 1931 units worldwide, QMx produced less than 200 pieces, making this ring an extremely rare piece of Dracula history. The Qmx caste is actually from the original ring that Forrest Ackerman wore.

The COA accompanying the ring states that Lugosi wore the ring in the 1931 film. Realizing their error, Universal and QMx ceased production of the most authentic caste ever created, making the piece even more unique and valuable to fans and collectors alike.

Contrary to popular belief, Lugosi did not wear the iconic ring of Dracula as we know it today in the original film. Instead, he wore a much simpler 1931 Dracula ring. It wasn't until the 1945 release of the House of Dracula that the now legendary ring was revealed.

In 1948, Bela Lugosi reprised his role as Dracula in Universals' Abbott and Castello Meet Frankenstein. Lugosi wears the ring for the first time and is forever tied to its legend.

As the story goes, after filming, Lugosi walked away with the ring, and no one had the nerve to take it away from Dracula.

Colorful Hummingbirds on Branch Table-Top Bronze Sculpture on Marble Base