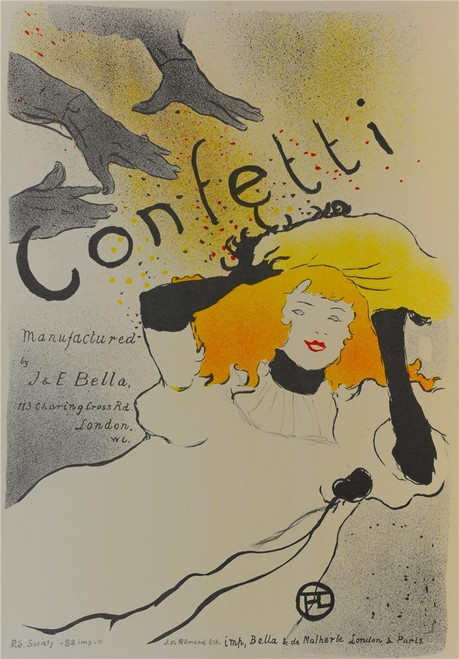 This is a hand pulled, fine art recreated lithograph of a poster that Henri de Toulouse-Lautrec made, in 1894, to advertise confetti.

The piece is titled: Confetti. He created the poster for La Revue blanche, "an adventurous literary magazine." It portrays an image of Misia Natanson, "the wife of one of the editors and a celebrated muse whose salons Toulouse-Lautrec frequented."

The lithograph features Lautrec's use of the splatter technique, which is a process that he had pioneered.

The piece is hand-pulled, by chromist Jean Pierre-Remond in 2000, at S2 Editions Atelier in New York under the auspice of the Re Society. The lithograph is pulled on hand made Rives BFK cotton paper using a rare, 19th century antique French Marinoni Voirin press. This is the same type of printing press that Lautrec used.

It is sequentially hand numbered and bears the chop mark of the publisher, Re Society, to distinguish it from the original.

Comes with a certificate of authenticity by S2 Art Group.

Packaged and shipped in a museum quality tube.

All The Works Of Mucha Lithograph